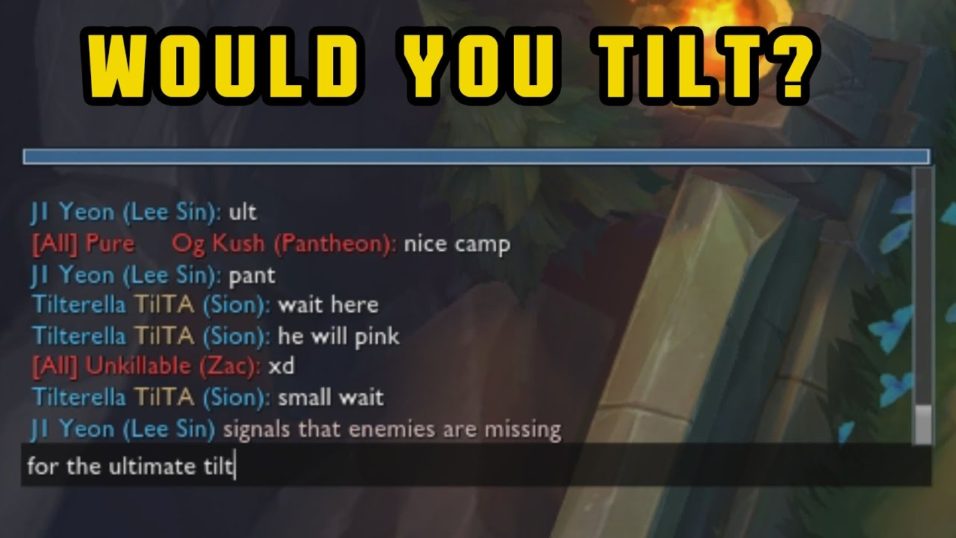 In this video I talk about how to get rid of TILT and the real reason why you tilt when you play League Of Legends.

Below you can find the transcription of the video I did above. It is also useful for those that do not want to view a video and just read text:

Welcome to League of Legends – The calmest game in the world.

Where Ivern peacefully roams the jungle and players from all around the world have the time of their lives, exchanging pleasant thoughts and wishes, like “get cancer”, “fuck your mother”, the classic “noob” and “kill yourself”.

Flaming is more common in League than in all other competitive games. At least, in all other games I played. Maybe there is a game out there with more flame. I did not find it.

Unfortunately, RIOT does not really care much about this. In fact, flaming and controversy brings attention so there is this conspiracy theory that the company does not actually care about it because it is beneficial for them. That may or may not be true but it is clear that toxicity is high. All-time high. This only makes TILT worse and in-game performance much inferior than what it could be.

Table of Contents hide
1 So TILT
2 So how do you solve TILT?
3 RECAP

What Is TILT? And what does TILT have to do with flaming? Let’s look at the definition of TILT.

“Usually a term in video games (though it can really be used in any activity or hobby), tilt is an emotional state when doing the exact same thing or activity over and over produces negative results. It’s an emotional breakdown and frustration of your hard work not resulting in the success that you crave so desperately. When you or someone is in a tilt state of mind, the best thing to do is take a break from that activity and try not to think about it as much.”

Even on urbandictionary.com, the 2 examples of using tilt in sentences are about League of Legends situations.

Now, the reason I mentioned flaming first is that the connection between TILT and flaming is quite strong. Whenever TILT appears, flaming follows. When flaming appears, there is always the possibility that someone will TILT.

Being TILTED is horrible and most players blame the other players for it. The truth is:

If you are TILTED, you can only blame yourself for it!

Why Do You Really Get Tilted?

You might think differently and most players do, but the truth is that usually, tilt appears because you, the player, cannot actually accept that something happened in the game. Something you think should not have happened, happened.

Endless examples can be given. The point is that anything can set off TILT. Anything from what happens in the game to what someone says in chat. And you being on tilt is nto the fault of someone else or caused by something that happened in game. However, most players will say this and will actually be affected by such events. This is because TILT is very common. Every single League player in the world can be affected by tilt, including professionals.

What you have to understand is that League of Legends is a team-oriented game. It is a skill-based game but there are 5 people on each team. It is impossible for you to control the behavior of the other 9 people playing. The only behavior you can control is your own!

Even the server you play on influences the gaming experience. For instance, surrender rates are much higher in Korea and Japan than in other regions. If you want to fight till the end, frequent surrenders can tilt you.

Then, people always think that they are so much better than they actually are. They do not take the time to see the mistakes they did and blame others, since this is easier to do. League of Legends is a competitive game. Losing or bad situations can make you feel bad.

Now, the key here is that it is NORMAL to feel bad. This is how you actually fight TILT. You accept the fact that things are not actually how you think they are.

Let me ask you a question.

Pick your favorite champion. How good do you THINK you are at playing that champ on a scale of 1 to 10?

Take that number and take out 2 or 3. This is a much better rating than what you think. The capability of being completely analytic of one’s actions is something really rare. In fact, it takes a lot of practice to be able to do this. You need to meet someone a lot better to see that you are not as good as you think. This is what happens in this game. All the other 9 people in the game are like you.

So how do you solve TILT?

You cannot really solve tilt. You cannot fix it. The only thing you can do is control YOUR actions. And your actions influence the other people on your team. If someone is flaming and you are flaming back, you create a toxic environment. Me, for instance, when I see that, I start to practice different things I know I am not good at. I do not care if the game is won or not, unless I know someone is in a promotion game.

Solving TILT is not as easy as some say. What works for one person does not necessarily work for another one. However, some good solutions include the following.

Just stop playing the game. Stop. Get off your chair and go grab a glass of water. Tilt is an emotional state. How do you change an emotional state? You introduce another one. Are you angry? You need something to calm you down! It is the same principle.

Out of all the advice you will find online, this is the one that is always on every single list of tips to get rid of TILT. This is because it works.

The big part here is that TILT makes you lose more games. If you stop playing, you do not lose those games. Also, TILT leads to more TILT. When you are TILTED you eventually TILT others.

How long should the break be? Well, for some people, the best thing they can do is stop playing for the entire day. For others, a 20 minutes break is enough.

There is a huge difference between saying something like “Next time you ping that you are on your way to gank, please follow up or at least let me know if you do not come” instead of “idiot jungler, reported”

When you use the first statement you might get a nice response in return like “sorry” and you might actually see the jungler respect what you said. Sure, it does not always happen but it is definitely better than the second approach since that one NEVER leads to something good.

If you cannot say something positive in chat, it is better to say nothing. Also, if you are tilted by what you see in the chat, /muteall. Pings are enough to communicate.

What I personally did to get rid of TILT was to completely disable chat. I just do not use it, unless I duo with someone. Pings are more than enough to communicate in game. I am a highly competitive person so I did often find myself flaming others and tilting them. Even if I rarely tilted, I tilted others. Eventually, this did make me tilt. As a result, I got like 3 chat bans after saying things that I am not proud of. In the vast majority of cases I was banned because I responded to someone that was flaming. However, I also flamed in return. So, me getting banned was completely justified.

Simply put, if you cannot say something nice, do not say it. If you are affected by what others say, mute them. You will 100% win more games if you do that. I thought this was just a myth until I actually did it. My win rate went up around 5% after this little move. That’s how well it worked for me and I know many players that started to mute others and ended up winning more games. Just try it.

Mastering a champion is a huge part of the game. It does wonders to help you climb. However, when tilt appears, you may be tempted to play another champ, not your main. This is a very bad idea. When you lose on the main champion and you choose random champions that you are not as good on, chances are your loss streak will continue.

You always see players blaming others for lost games. Even those that feed without any justification or reason find some sort of reason why that happened. The jungler did not gank. The support did not use wards. The ADC did not use HEAL. So on and so on.

Blaming others will not help you get better, win more or reduce your tilt. It will only make things worse because this mentality influences future games. You blame your team for a lost game and end up expecting this to happen again in the following game. Sounds familiar?

Once again, the only person you can control is YOU. Avoiding TILT is all about accepting the fact that you will lose games and that every lost game is an opportunity to learn something. This is why so many pros and high elo players keep talking about VOD reviews. They often watch their games. They do this to identify what they did well and what could be improved in the future.

Did you lose a game? Watch it and see what you can improve.

TILT is a bitch. The worst thing about it is when you know you are tilted and cannot do anything about it. You end up stuck in it. However, if you manage to accept the fact that you cannot control others and you focus on your game, tilt might not even appear.

Usually, for most people I talked to, the impact of TILT and even occurrence goes down in time. Because of experience.  This basically means that the more games you play, the less likely it will be to TILT. However, this is only true if you also work on your game and you actually accept the fact that you cannot control everything. There will be things that will not go as planned. Mistakes will be done. It is a normal part of playing League of Legends and any other game out there.

Follow the advice above and your win rate will increase. You will not even realize why it happens as it happens. I do not even remember the last time I was tilted or flamed someone. In the past months there was only one situation in which I used chat and wrote:

“I do not use chat but I just had to say that this Veigar is an idiot.”

Now you tell me: was I tilted or not since I did that? Of course I was. I also said that I do not remember the last time I was tilted. This is how TILT operates. In most cases you will know that you are tilted but in many others you will not. You will just make bad decisions in-game. In the game with that Veigar I constantly tried to push objectives since the team was behind when I should have just tried to bring the team towards the Veigar that never moved. I realized this when I watched the VOD.

Always work on improving your game and work on what you can control!