Making money online is not as difficult as you may think if you work hard and you learn what you have to do. The problem is that most people are not willing to do that. They look for different get rich quick schemes. That would not be a problem if they would be prepared for what that actually means. It means that there is a good possibility you are going to be scammed.

The vast majority of people that want to make money online will be scammed at least once. What you do when you are scammed is important but it is equally important to avoid getting scammed in the first place.

Getting back to the subject at hand, I am now mainly talking about the Elite Earners Club (EEC) scandal that recently appeared. You just have to go to the official Facebook group and see the whole drama develop.

Elite Earners Club (official website here) is a very simple site. The idea was that people would deposit funds and an experienced trader, the owner of EEC, would make Forex trades to make a promised profit of up to 15%. People started to invest and some trading was obviously done. As every Forex trader knows, there are moments when you make a lot and moments when you lose a lot.

At one point in time the Tamoor guy stated that losses were recorded, something around 60% of all the money available. That would not be a problem but that was when the shady things started to happen. Tamoor said he was ill, exhausted and so on. Eventually, we reached this moment in time when people started to freak out and Tamoor disappeared.

Is EEC A Scam?

Most likely, when it initially appeared it was not a scam. There were many reports of people that were happy and proof that trading was done. However, at one point in time something happened and we reached this point in time. The owner had a flawless reputation until this. After the program started to go down and problems appeared, different reports appeared that showed he was not exactly as it seemed.

Leaving that aside, what you should remember about Forex trading in general is that:

“It is impossible to make only profits every single week for a long period of time!”

The fact that money was taken from other people for investment purposes was a clear recipe for disaster. Whenever something bad happens and trading does not go as initially promised, people will start to complain. Even if the trader is really good, the pressure will get to him and problems will develop. Losses are normal in Forex trading but when extra pressure appears, you will collapse.

Obviously, there is also the possibility that the owner had the idea of scamming all along. He knew he was good but did not have enough money to make a lot of good trades. Then, when trades started to be stressful or when the time was right, the decision was to disappear.

Unfortunately, there are so many. The most important one is the same that should have been obvious with the My24Hour Income fiasco:

“Never invest more than you can afford to lose!”

Below you can see some screenshots of people that invested a lot of money. 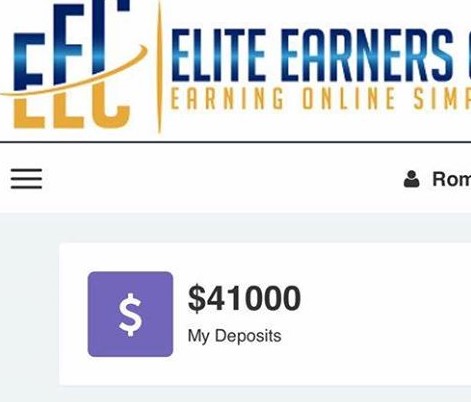 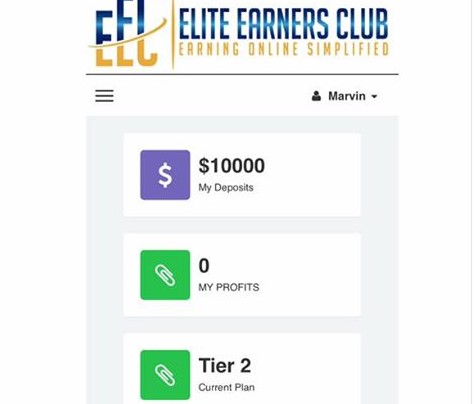 When going through the comments you can also see people that invested over $100,000, with so many between $40,000 and $90,000. Most of these people cannot actually afford to invest so much. So many of those that invested a few thousands said that they were their savings or the money that the entire family relies on. In this attempt to go for a quick income people actually end up losing homes in the real world. The same happens in the online world.

“Never invest before you know everything about who handles your money!”

There are numerous investment funds in the world. They accept investors and they offer a complete transparency. The money that they offer in return is definitely not as much as 15% but they do a really good job because they are 100% legit. They are not run by one Forex trader. There are teams of specialists that carefully track all the investments made. In return the money that is gained is sort of guaranteed. Although even then there are situations in which profits are incredibly low or money is lost, it does not mean that on the long run things will not go well.

In this EEC example there was just one person handling the trades. The only thing known about him was that he was legit because of some revshare investments in the past. Did Tamoor have proven Forex trading experience? Not really. Was complete transparency always available? Not really. Is there a company that is registered and that guarantees that a return policy would actually exist? NO. Is there any way to get your money back in the event you want to and the site owner does not want to? NO.

Most people focus on proof. Proof can be made and there is always the possibility that work will go great for a while. This does not mean you will not be scammed. Instead of relying on proof, you have to rely on research and common sense.

“Don’t believe what others say when problems appear!”

As soon as it was obvious that EEC was almost dead and that Tamoor was most likely not going to come back, the opportunistic vultures started to appear. There are two examples below: 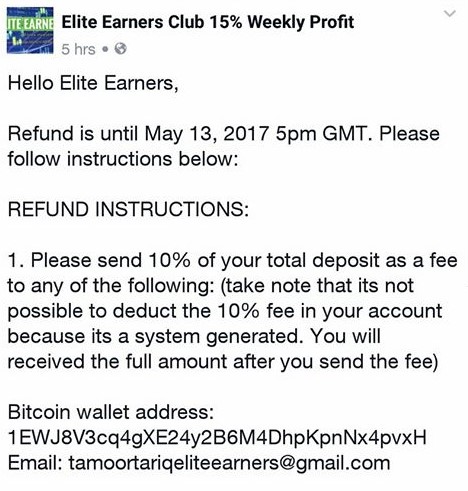 It is important that you do not act in the heat of the moment when problems appear. The 15% scam attempt above led to more people losing a lot of money and an anonymous scammer making some quick cash because people either do not know what to do or they simply act without thinking about it. The other one is just a shady attempt to get some referrals, some bonuses to another program. In many cases these are pretty bad and you can easily end up losing even more of your money if you invest in the heat of the moment.

I have been saying this for a long time and basically every single one in the online money making industry with experience will tell you that you have to invest your money into various different investments in order to be sure that you succeed on the long run. I talked about this topic a little here.

Putting all your money in one site or a really big part of it automatically guarantees that eventually you will lose that money. Instead of having put a huge $40,000 in EEC, a smart investor would have most likely invested in at least 10 programs. Since we are talking about $40,000, $80,000 and similar amounts, smart investors would have actually invested a lot into learning how to trade Forex or make money online in general. Even putting money in the bank would be a smarter idea.

Elite Earners Club is dead. This is quite obvious. Tamoor knows it and everyone with some brain knows it. Even if this Tamoor guy is legit and comes back to offer some refunds, it is impossible to ever be successful after such a fiasco. Most likely, Tamoor just ran away with most of the money. Since nothing was legal, it is his right to do this since people basically donated money to him. The idea of catching him does not do anything. You do not need a lot of money to live a king’s life in Pakistan or even move to another country.

If there is something that you can do to guarantee that you are going to make money online it is to basically educate yourself of what you have to do. If you want to invest, do diversify your investments and try to put money only in programs/sites that have a proven track record. If you have $50 to invest, invest in 5 to 10 sites. If you have $100, maybe 5 to 15. This is how you grow your portfolio and you are protected from what could go wrong.

Most online money making opportunities disappear. The trick is to be in profit when they do. With EEC I still did not see anyone that made a profit in any of the screenshots posted in the past few weeks. This is just one of the reasons why I did not invest. If you did invest, kiss your money goodbye and learn from this unwanted experience. Next time you will be more cautious and you will not put your entire investment budget in just one option.