I rarely write something like this but the truth is that Upwork is now simply mocking freelancers, their clients and so much more, in a foolish attempt to increase their profits at everyone else’s expense.

The freelance world is now rocked by the announcement Upwork made about its fees, changing from a flat 10% fee for projects done to a sliding fee structure. From the official announcement:

Let us not forget about the addition of a fee for every single client that adds money to the Upwork account in order to pay the freelancer for the work done.

What does this practically mean?

It means that you will end up having to pay 20% fee as a freelancer on all the work that you do. Combine that with the FORCED addition of VAT and the withdrawal fees and you end up with quite a lot of your money leaving you. I am not even going to talk about the VAT problem since when I asked Upwork to SHOW ME the law that forces them to do that, they failed to respond. According to EU law, you are the person responsible for such VAT payments and when you have clients that live in the US and work with EU freelancers, Upwork is actually not obliged by any law to pay any VAT on those projects. That money lands in their pockets.

Leaving the VAT part aside and getting back to the current fee system that Upwork will implement in June or July (I do not remember exactly and it is irrelevant), we are faced with something that can only be described as lying and tricking people.

Upwork Does Not Care About The Community

Every single announcement made is done with a “focus” on the community and Upwork keeps telling everyone that they have the community in mind. Well, the community speaks and nobody listens to them. You can check out this post and see 700 comments in the past 20 hours,surely many more by the time you click. All of them say only bad things about the move and about how Upwork is practically destroying its own business.

Upwork responded to one of the guys complaining by saying:

since our earnings are based on income earned via our platform, we are only successful if our community is. This decision is based on creating pricing that will support our community better long-term.

Well, given the fact that the VAST MAJORITY of freelance projects done on freelance platforms between 2 parties are under $500, how is that supporting the community? We also have this lovely thing in their FAQ:

This is just like answering with “we will eventually do things better” to the question “What do I do if I lose money now?” Total lack of awareness and understanding of the freelance market.

Upwork Lies To You – Proof! 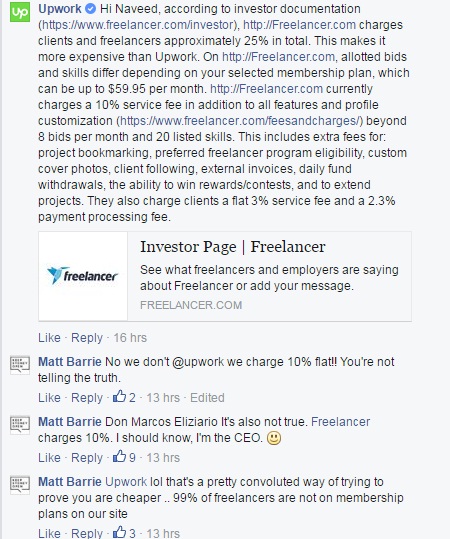 In case you were not aware, Matt Barrie is the CEO of Freelancer.com and its founder. Even he had to step in and talk about such a blatant lie, responding from his PERSONAL Facebook account.

How LOW can you be to say that the competition’s fees are DIFFERENT than what they truly are?

Even Clients Are Upset

When you choose one side, you normally stick to it. You do not upset both parties. With Upwork, they managed to make even the clients mad. Besides the addition of the fee, Upwork claimed at one point that they have to invest in client acquisition. Well, most of the clients that chose Upwork in the past did so without those ads that they constantly run.

Upwork runs many ads but they do so to promote their business. The lie is that they do this in order to get new clients, especially at an enterprise level. I often find myself browsing the projects posted on Upwork and I challenge you to find projects posted by large enterprises.

News Flash: Large enterprises directly look for freelancers. They do not use Upwork or freelancer.com or Fiverr, as Upwork would want you to believe.

Clients are upset with Upwork because:

The Real Repercussions Of The Upwork Fee Change

Upwork is simply bullshitting people. There is no other way of saying this. I have been working as a freelancer online since 2003. There are some truths about working with these freelance platforms that have to be said:

Upwork is NOT listening to the community and is doing whatever it feels like. This will lead to the following results:

The sliding fee rubbish that Upwork implements now is not done for the benefit of the freelancers or the clients. It is only done in order to increase the money that Upwork makes, mainly since we are talking about a really large company that has many serious investors, investors that are most likely forcing the current CEO to make more money for them.

Freelancing is all about creating a relationship but it is also about many other things. Money is a big part of everything. When you keep hitting that and reducing the money that people make, you are bound for trouble and Upwork has been doing this ever since they eliminated Elance, which was a far superior service.